October 29, 2017 – January 26, 2018
Mix Nine (Hangul: 믹스나인, stylized as MIXNINE) is a South Korean survival reality show on JTBC. In the show, YG Entertainment founder and producer Yang Hyun-suk travels to music agencies all over Korea to find up-and-coming K-pop stars. The final component of the show will be a competition between a team of nine boys and a team of nine girls, and the winning team will debut as idols.

Main article: Full Article
In October 2017, Ryujin auditioned for survival reality show MIXNINE. Having passed the audition, she made to the number 1 ranking of the girls' team until the final episode, but was eliminated when the boys' team won against the girls', and hence ultimately did not get to debut.

The first episode introduces all 170 participants wherein selected ones voiced out their intentions in joining the program. Noh Hong-chul was seen as the show's host. The next part introduces Yang Hyun-suk and rapper CL as the judges as they start traveling to different agencies located all over the country for the audition through Yang's car. Two buses ('Debut Bus' for the 9 chosen contestants and 'Trainee Bus' for the remaining ones) are seen traveling along with the judges car. For every contestant who passes the audition, he or she would be riding the bus along with the other contestants. The trainees' auditions are simultaneously watched by the judges, their agency's CEO, and their co-trainees in the bus. At the end of the episode, the music video of "Just Dance" was shown.

The show starts with introducing a '1-Day Special Mission' for the chosen participants of the show, to be shown later on. For now, the episode continues with Yang Hyun-suk traveling to different places for auditions. In this episode, singer Zion.T comes along with him to judge. Towards the end of the episode, Big Bang member Seungri joins Yang in his car going to one of the biggest agencies in South Korea, JYP Entertainment.

Again, the show starts with the participants gathering in a room to do the '1-Day Special Mission'; a new set of "Debut Team" will be formed after their evaluation.[32] Participants are given two (girls) or three (boys) dance songs for them to perform in front of judges Yang Hyun-suk and Lee Seungri. Participants who are given the pass by the judges would proceed to the singing portion and only nine people would be chosen to be included in the "Debut Team". The trainees are given a shortlist of songs. After the 20-minute video, auditions carry on with Yang Hyun-suk by himself for the first half of this episode. Then, the episode continues with finishing JYP Entertainment's audition's scene (which was held during the end of the second episode) and Park Jin-young judging YG Entertainment's trainees afterwards. The episode also features Big Bang's Taeyang as a guest judge. With this, this episode concludes the auditions for the show: the judges panel toured for 15 days (240 hours); 72 entertainment agencies have visited; 403 participants auditioned; 170 participants (98 girls and 72 boys) passed the audition. It also marks the start of public voting.

The episode starts off with giving each participant his/her number according to their rankings. All contestants are divided into four levels: Top 9, A, B, and C. At that moment, the 'Mix Nine's VLive Showcase' is announced along with the show's theme song, "Just Dance", and its choreography. The participants start to train by their levels with the trainers of the show. Right after, their mentors tell them their new mission: record their song and dance individually from 9AM to 3PM for re-evaluation of their level, or they are automatically put to C-class. The next day, all participants are to perform once again for a chance to level up (or down). 9 chosen members from each level of girls and boys team perform the song on stage. A new set of Debut Team are formed at the end: ONF's Hyojin and Fave's Lee Sujin are chosen by Yang as the male and female centers, respectively, for their first live performance. By the end of the show, their rankings based on the judges and people's votes are revealed. In total votes, the boys team (28,650 votes) earned an additional 1000 points each for winning against the girls (25,680 votes).

Noh Hong-chul meets with the trainees to announce the next challenge after the ranking announcement. The trainees are tasked to perform live in groups based on positions they want to debut in: vocal, dance or rap. Participants of each gender will have to choose from 4 rap songs, 6 vocal songs, or 8 dance songs: 18 songs in total. If the number of people exceeded in their chosen song, the team will decide who to drop through self-evaluation. The male and female participants will go against each other based on their position and the group who earns the highest points combined (50% judges; 50% audience's votes) will receive an additional 2,000 points each. Only six groups are covered this week.

The remaining twelve teams perform their respective stages and rehearsals for the groups are shown. After the last performance, the contestants are shown their overall ranking based on their positions. The additional 2,000 points are given to 9 teams (88 contestants) for receiving the combined highest points on their respective group and additional 2,000 points to Kim Byeong-kwan, Woo Jin-young, Kim Hyo-jin for males and Kim Hyun-jin, Jeong Sa-ra, Im So-hyun for females for receiving the highest points in dance, rap, and vocal position respectively.

The first elimination round takes place on this episode. Participants enter the stage by their Position Battle teams and snippets of their performance are shown. Yang announces whether each member passes or gets eliminated in the show based on the showcase, position battles, additional points and online votes. Out of 170 participants, 99 remains (46 girls; 56 boys) and 71 contestants are eliminated. Top 9 from each gender was then announced: Woo Jin-young and Shin Ryu-jin receive 1st place, while the former ranks first in the overall rank; Lee Jaejun ranks 99th, escaping elimination.

A new mission is announced: Formation Battle. Unlike the first mission, Formation Battle is a battle between the same gender. Also, the songs, remastered by YG producers, are decided through the survey about the contestants' role models and life-song. 10 teams are formed to compete for 10 songs given. Being in the Debut team, the members are allowed to choose their preferred songs. However, a maximum of 3 members from the Debut team are allowed in one song. They are to choose their members afterwards. The winning team will receive an additional of 10,000 votes while 2nd to 4th placers will receive 7000, 5000, 3000 more votes, respectively. 5th place receives 0 votes. The performances of all the female teams (5 groups) are covered this week: "Tell Me Your Wish" (Girls' Generation), "I'm Your Girl" (S.E.S.), "Bad Girl Good Girl" (Miss A), "Really Really" (Winner), and "Honey" (KARA).

The episode starts off with revealing the ranks of the girls' performances. It then continues with the formation battle between the remaining 52 male contestants. The performances of all the male teams (5 groups) are as follows: "Hug" (TVXQ), "Ringa Linga" (Taeyang), "It's You" (Super Junior), "Paradise Lost" (Gain), and "Bang Bang Bang" (Big Bang).

The episode starts off with revealing the ranks of the boys' performances. Then, another new mission is announced: Digital Song Battle. Both male and female teams will be given 3 songs each, and participants will be evaluated individually. Out of 99, only 54 participants (Ranks 1 to 27 from both male and female teams) are able to participate. Six songs are introduced: Kang Wook-jin, Diggy, and LIØN's "Hand in Hand"; FUTURE BOUNCE's "Super Freak"; MC Mong's "Stand By Me" and "After This Night"; Ilhoon and Kamen Rider's "Hush"; and Kim Dohoon's "Dangerous Girl". Participants start to pick their chosen songs one-by-one by ranking. Soon after, the second elimination round commenced. Participants enter the stage by their Formation Battle teams and snippets of their performance are shown. Yang announces whether each member passes or gets eliminated in the show. Woo Jin-young and Shin Ryu-jin rank 1st place once again; the latter ranks first in the overall rank.

Participants who survived are re-grouped (a maximum of nine members each) due to uneven distribution after the last elimination round. Male and female members from each team go against each other and the three best individuals for each team will receive 5000, 7000, and 10000 points, respectively. Individual scores are based on 20% judge votes and 80% audience votes. All three female groups are covered this week.

The episode follows the Digital Song Battle with the remaining three male groups' performances. By the end of the episode, a preview of the Debut Team going to Big Bang's concert as a present by Yang Hyun-suk was shown.

The episode starts with a poll of the participants conducted before the elimination round. This includes 'Top 3 Visual': Kim Hyojin, Kim Hyun-jong, and Lee Jae-jun for boys, Lee Ha-young, Choi Moon-hee, and Jeon Hee-jin for girls; 'Hot Guy Representative' Shim Jae-young; 'Crying Queen' Shin Ji-won; 'Most Energetic Girl' Kim Su-hyun and Kim Hyun-jin; and 'Most Easily Excited Boy' Kim Guk-heon. During the elimination round; participants enter the stage by their Digital Song Battle teams. Jang Seongkyu replaced Noh as the host for today. Names of the top 18 trainees are called by Yang one by one starting from rank 15. Shin Ryu-jin retains her 1st rank while Kim Hyo-jin replaces Woo Jin-young for the first time. Four new songs are announced afterwards: "Come Over" (produced by Robin) and "Omona" (produced by ) for girls; "I Like It Too" (produced by Kang Wookjin, LIØN, and Diggy) and "What!?" (produced by Kang Wookjin, iHAWK, BIGTONE, and Diggy) for boys. The remaining trainees choose their positions beginning with rank 18 up to 1, with the higher ranked trainees being given the advantage of replacing the lower ranked trainees and bumping them into another song. After finalizing the teams of four groups at the end of the episode, 12 participant representatives' audition presentations or live performances are shown according to their positions: dance, rap, vocal.

This episode was broadcast live at the Ilsan Kintex, five days after the last episode. Both Noh Hong-chul and Jang Sungkyu host the show while the final judges include Seungri, Taeyang, Zion.T and Yang Hyun-suk.

All the participants are first introduced one-by-one according to their ranks starting from the men's team. Soon after, they perform "Come Over", "What!?", "Omona", and "I Like It Too", respectively. After their performances, a VTR of the participants watching their individual "Just Dance" re-evaluation (from Episode 4) was shown. They then performed "Just Dance" live with Kim Hyo-jin and Shin Ryu-jin as the centers. Following the performance, the live voting closed and the announcement of Top 9 started. Both Woo Jin-young and Shin Ryu-jin topped the men's and women's team. In the end, men's team won against women's with the score of 8,114 over 7,866. The scores are determined 20% pre-broadcast online votes, 30% text votes during the live show, 20% pre-broadcast online preference rankings, and 30% judges' scores. 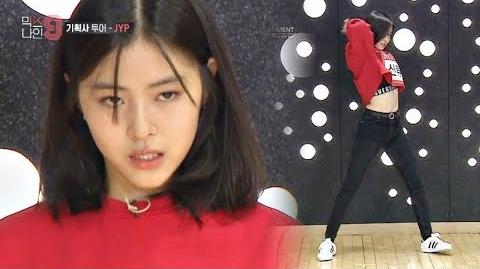 Retrieved from "https://itzy.fandom.com/wiki/MIXNINE?oldid=6993"
Community content is available under CC-BY-SA unless otherwise noted.